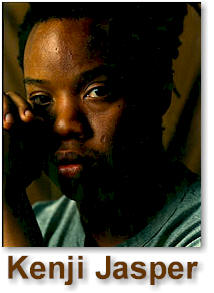 from Dark
A novel by Kenji Jasper

Of the four of us, I was the smart one. I did the best in school, I got a few awards, and I even got to introduce Mayor Barry when he came to visit my junior high school. E was the lucky one. Everything always went his way no matter what the odds were. Ray Ray was the crazy one. He would do anything just for the rush. He’d smash somebody in the mouth at a party a half a city away from home just to see the look on the man’s face when he took that first hit. But Snowflake was the bad one. He did what he wanted. And when you were around him, you did what he wanted too. If you didn’t he caused problems. Even though he was our main boy, we didn’t want any problems from him.

We all lived in Shaw. And Shaw was a place where you didn’t come to play around. The threat of bullets and beat-downs always hung in the air like the smell of burning tar. If you walked by the right building at the right time you might hear the Williamses arguing about their son Damien’s crack habit or Mr. Harris on the third floor yelling at the newspaper about how the Redskins wouldn’t make it to another Super Bowl in his lifetime. Or there was always Frank, who spent his days over on the playground impressing the little kids by showing them the bullet scar on his calf and the chrome- plated 9mm that gave him the scar when he dropped it on the ground while running from someone he owed money to.

But Shaw was a little different than a lot of the other neighborhoods in Northwest. We went hard but we weren’t anything like the cats down in Southeast or the ones in Northeast off of Montana Avenue. We were right between downtown and U Street, trapped between the suit-and-tie DC you saw in the movies and the place people burned down after they killed Martin Luther King long before I was born. To me that made us special, something more than just another name they called out at the go-go clubs on Saturday nights.

If anybody asked us, that was where we said we were from.

Kenji Jasper is the author of the memoir The House on Childress Street (Harlem Moon), and the novels Snow (VIBE Books) and Dark (Broadway Books), a Los Angeles Times and Washington Post bestseller. He co-edited the nonfiction book Beats Rhymes and Life: What We Love and Hate About Hip Hop (Three Rivers Press), and his articles and essays have appeared on NPR, and in Newsweek, The Village Voice, Essence, Ebony, and VIBE, among others. He has taught at Carnegie Mellon University, the University of Florida, Morehouse College, Spelman College, and the College Success Foundation. He holds a BA from Morehouse College.